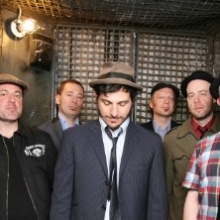 Those hard working purveyors of ‘Jamaican RocknRoll’ known as The Slackers, have been in existence for a quarter of a century now. This band, which started out rehearsing in a dingy basement on the lower east side, has gone on to become a legendary touring group and has been playing over a 100 concerts a year
since 1997.

As of 2015, the Slackers have played in 46 American states, 7 Canadian Provinces, 23 European Countries, 5 Latin American nations, and 2 Asian countries. In the last 2 years, they have played everything from festivals like Punk Rock Bowling and Fest, to midsize concert halls like the S036 (Berlin)or Underworld (London), plus a bunch of bar gigs and even a few intimate private parties thrown in for good measure!
Beginning in New York City in 1991, The Slackers have developed their signature sound that mixes together
Jamaican Reggae and Ska rhythms with Anglo-American RnB, Blues, and Garage Rock. Bandleader, Vic Ruggiero, coined this blend as ‘Jamaican RocknRoll’, to describe a sound similar to what the Rolling Stones would have sounded like if they grew up on as much Bob Marley and the Skatalites as they did Howling Wolf and Bo Diddley. The Slackers will be starting their 25th anniversary celebration with a new album simply self titled, ‘The Slackers.’ If Jamaican RocknRoll is the Slackers trademark sound, this new album might be know as ‘Psychedelic Jamaican Rock N Roll.’ The influences of ‘Pet Sounds era’ Beach Boys, ‘Sgt Pepper era’ Beatles and other 60s rockers are prominent in the blend.